Mid-Quarter Update: Sticking to the Process, Even When It's Hard

As if concerns about inflation, the war in Ukraine, and rising interest rates weren’t already enough, investors have had to contend with volatile markets these past several months. It is discomforting to watch one’s portfolio decline while prices for food and gasoline go up, and we share in the frustration.

What started with weakness in speculative assets earlier this year has spread across markets more broadly. It hasn’t helped that companies have started to report mixed earnings and outlooks, as inflation and supply chains have continued to pressure sales and profits. Recent reports from big-box retailers Walmart and Target confirmed the impact of inflation, logistical challenges, pressured margins, and concerns about a pullback in consumer spending that could ultimately lead to a recession. Unsurprisingly, markets didn’t react well to such tepid reports from retail bellwethers, and stocks continued their sell-off into yesterday’s close. The S&P 500 Index is now down roughly 18% from its all-time high, teetering on the edge of bear market territory (defined as a decline of 20% or more), and the growth-heavy NASDAQ Composite Index is down nearly 30%. As grim as these numbers seem, they mask even weaker performance by individual companies, many of them household names. Netflix, one of the original FAANG stocks, is down 73% from its highs, for example. Other stocks that became investor darlings during COVID are similarly down, with PayPal off 74% and Peloton down 91%.

To add to the challenge, bonds, which traditionally maintain their value when stocks decline, have been declining for months. This has been driven by the Fed’s hawkish pivot as it raises interest rates and ends its bond-buying program in an effort to beat persistent inflation. On the year, the Bloomberg Barclays U.S. Aggregate Bond Index is down nearly 10%, and Treasury bonds are having their worst year since record keeping began in 1973.

Regarding equity markets, we believe the volatility is likely to persist. Calling the bottom is a difficult task, and, as we mentioned in a prior note, it remains to be seen whether we are simply in the midst of a routine correction or something larger and more prolonged. Stocks have begun to reflect a certain amount of anticipated economic weakness, but they haven’t fully priced in a recession. To help combat the volatility, we remain focused on companies that have durable margins, strong balance sheets, and healthy free cash flows.

For bond markets, while we are not prepared to call a bottom, we expect a respite from the selling pressure. Bond yields have spiked sharply in the past six months, and it is unlikely that we will see similar weakness without unexpected jumps in inflation or a more hawkish tone from the Fed. Given current expectations for inflation and Fed policy, bond valuations have started to look a bit more attractive, with yields better than they’ve been in years. Barring the unforeseen, we expect bonds to start behaving more bond-like in the coming months, offering stability and income to portfolios. That said, the Fed has yet to embark on quantitative tightening (QT), and there is little historic precedent for the impact of QT on bond yields. There is risk that the Fed’s actions lead to overtightening, which could cause long-term bond yields to rise even further from here.

In the midst of these various dynamics, it is helpful to have context. Since the 1970s, when inflation was also running rampant, annual stock market returns have been positive in 42 of the past 52 years, despite average intra-year declines of 14% (Exhibit 1). Furthermore, the average annual return for the S&P 500 Index has been 12%. 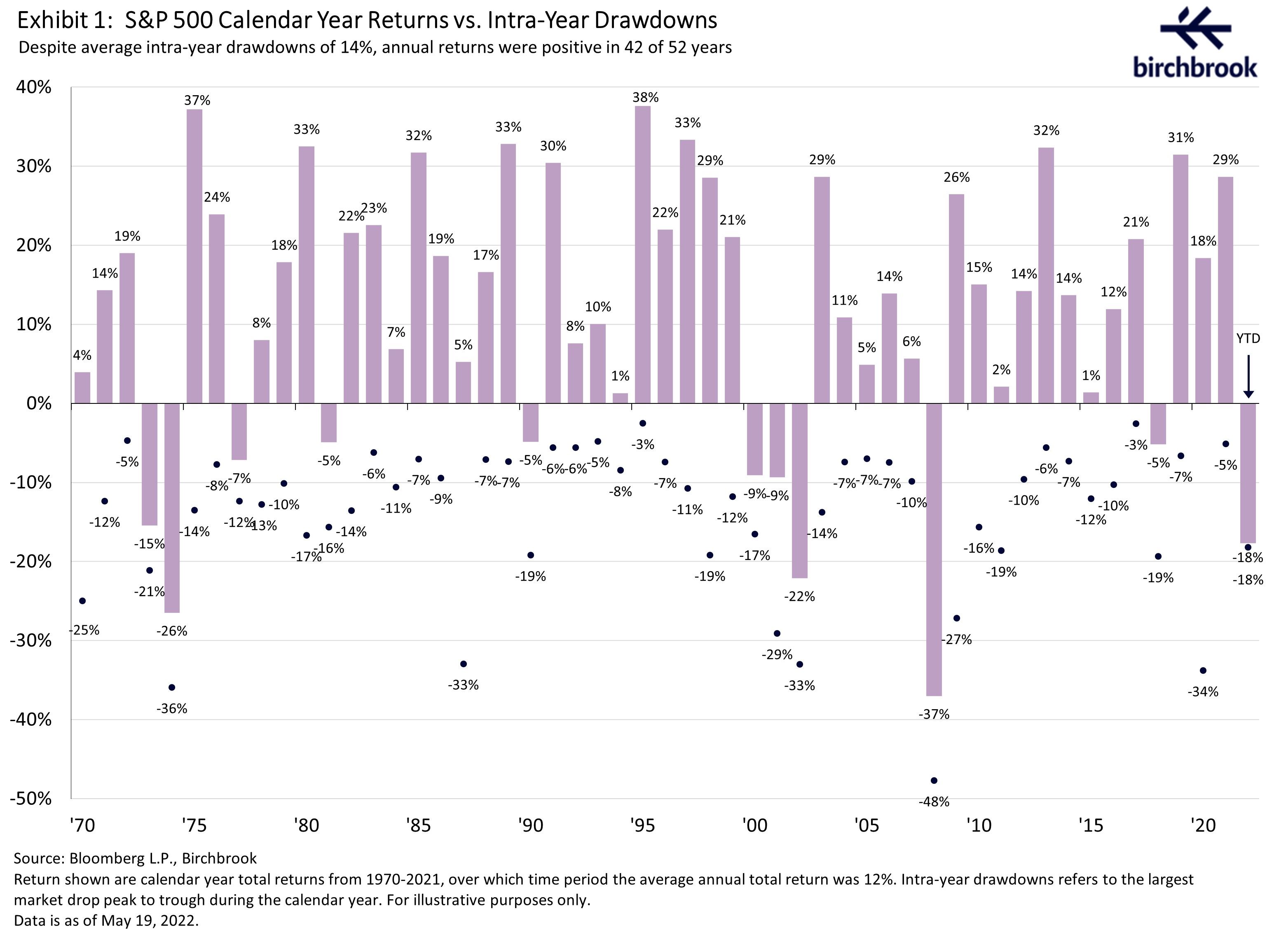 It is only natural for market volatility to trigger an emotional investing response, and pullbacks can make one question whether one’s long-term financial footing is intact. However, it is important to examine where we are today through a historical lens and make informed investment decisions based on a disciplined investment process rather than emotion. Timing the market is nearly impossible and missing even a few of the stock market’s best days can negatively impact an investor’s long-term returns. Just like the economy, the stock market is cyclical, and, as the above chart illustrates, one can expect numerous pullbacks even during normal times. Over the long run, despite its ups and downs, the market has consistently rewarded patient investors. As much as market downturns make us all feel like we need to do something – anything – sometimes the best course of action is to simply hang tight. Maintaining a diversified portfolio based on one’s risk tolerance should provide an adequate level of stability during volatile periods while also allowing for returns once things return to normal.

We expect to rebalance into this market should volatility persist to the downside, and we will be opportunistic as the market allows. For those in the contribution phases of their financial plans, dollar-cost averaging can help take advantage of today’s lower valuations. Now would be a good time to reexamine investment elections in your 401(k), for example.

To close, if the recent volatility is causing you significant concern, please reach out so we can discuss. Additionally, if you’ve had a change in life circumstance that will require more cash than anticipated in the coming 12 months, then we should talk. Our aim is to help you ride through times like these so that you can meet your financial goals on the other end.