It has been a dramatic week in the markets. Here’s a quick summary:

2. On June 15, 2022, The Federal Reserve increased the Federal Funds Rate by 0.75%, the largest increase since 1994, in an attempt to curb a historic jump in inflation. Our nation is nervous for a host of reasons.

3. Bear markets are normal, and we were overdue for one. Historically, the average bear market lasts about 14 months, has an average decline of 36%, and bottoms out after an average of 52 days. We may not be at the bottom yet, and we cannot know how long or deep this bear market will run.

4. Bull markets are historically longer than bear markets, and growth in bull markets has always outpaced declines in bear markets. History shows us that the market comes back, and usually relatively quickly.

5. Our recommendation is to hold on and ride this out, but if current conditions are causing you to lose sleep, let’s talk about how we can help.

Read on for a more detailed analysis:

On Monday, the S&P 500 Index officially entered a bear market, defined as a prolonged market decline of 20% or more. This didn’t just happen overnight, of course. Stocks have been volatile for months, and lower-quality equities have been under pressure for the better part of a year. The Nasdaq Composite Index, which includes a number of high-flying and low-quality growth stocks for example, has been in a bear market since March. This is happening at a time when inflation is making it harder to cover basic living expenses, and it’s precisely this fear of inflation (and the Federal Reserve’s response to it) that has driven market volatility.

Many economists and investors had begun to hope that inflation had peaked. However, last week’s inflation report for the month of May showed inflation remains well above expectations. This prompted the Federal Reserve yesterday to increase the Federal Funds Rate, the benchmark rate upon which all other interest rates are based, by 0.75% - the largest increase since 1994. High inflation puts pressure on the Federal Reserve to raise rates, but higher interest rates are tough medicine because they are another form of price increase (more paid for mortgages, car loans, and credit cards). It’s no wonder then that consumer confidence is low and expectations for a recession have increased. In this type of environment, neither stocks nor bonds tend to perform very well, leaving investors with few palatable alternatives. Therefore, during times like these, it is often best to ride out the storm.

Of course, we all want to know how long this will last. The average bear market going back to 1956 has lasted 14 months, with the S&P 500 Index declining an average of 36% each time. It has typically taken 52 trading days for the market to bottom out after first entering a bear market, which would be another ten weeks from here.

However, as shown in the chart below, no two bear markets have been exactly alike. Some have been as short as three months (the 2020 COVID-19 recession), and others have been as long as 30 months (the Dot-Com crash from 2000-2002). Losses have ranged from 22% (in 3 cases) to 57% during the Great Recession. This wide range of possible outcomes is just one reason we never recommend trying to time the market. No one knows whether this will be a shallow bear market or a deep one. History has shown that markets eventually recover from bear markets, and, if anything, they provide buying opportunities for long-term investors. 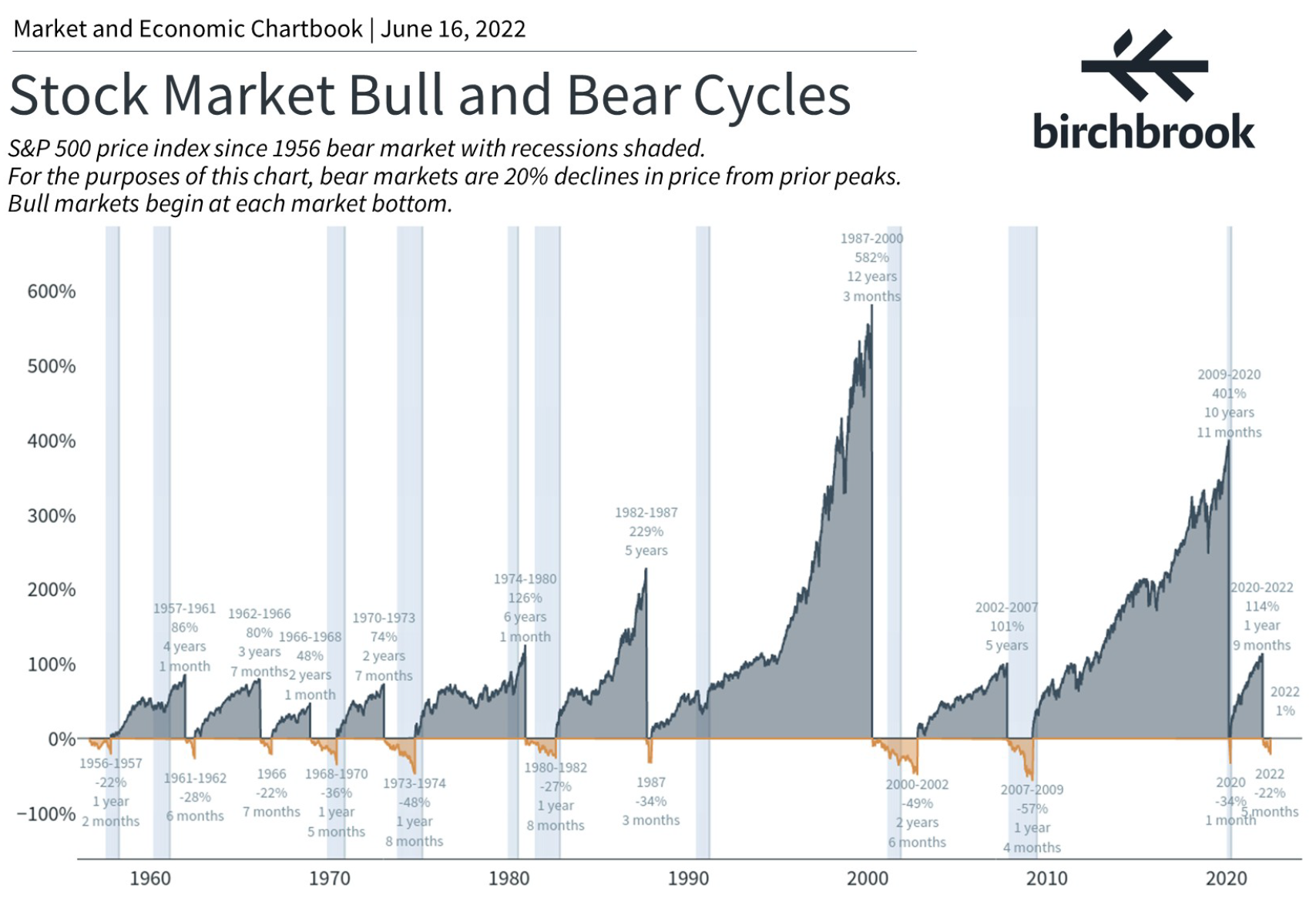 It can be helpful to keep the current market decline in perspective. Until recently, stocks had enjoyed a bull run lasting more than a decade (the brief COVID crash notwithstanding). Market values ebb and flow, and it is natural to give back some of the outsized returns of the past several years. If the current bear market were to align with the average historical bear market, then the S&P 500 Index could fall to as low as 3,100. This would mean a further 19% decline from here, give or take. That sounds scary, but at 3,100 the S&P 500 Index would be only 8% off its pre-pandemic high of 3,385. For anyone invested in the S&P 500 Index over the past decade, a starting point of 1,345 and an ending point of 3,100 would still represent a cumulative return of 130% or 8.7% per year – a level of growth in-line with the historical average going back to 1928 (9.4%).

Importantly, since 1950 the S&P 500 Index has been higher 75% of the time three months after falling into a bear market, by an average of 6.4%. One year after a bear market, the S&P 500 Index has been positive 75% of the time, climbing 17% on average. It is also worth noting that the average bull market has lasted five years and nine months and returned 192%, meaning bear markets are comparatively short-lived. We believe the most important driver of portfolio returns over the long term is the amount of time in the market and missing even just a few of the best trading days in a ten year window can severely reduce one’s overall investment return.

What this ultimately means is that we recommend staying invested, in accordance with your specific risk tolerance and life situation. History tells us that bear markets are painful and unpredictable, but relatively short lived. Precisely because the future is uncertain, we must rely on history for clues as to what to do. History says the best course of action is to remain invested through trying times.

During bull markets, it is very easy to accept risk in the markets but bear markets tend to be the true test of one’s willingness to accept risk. If riding this out is causing you to lose sleep, we should revisit your current risk allocation. Please give us a call.

As always, please contact us with any questions or concerns you might have. We appreciate the trust you have placed in us.